Wade Clark is no stranger to streaming events. When the technical challenge arises to coordinate, produce, and stream a live event — all with a limited team — Wade gets excited. A staff videographer at BoxCast, he also runs his own media production company that specializes in capturing events with video — often for virtual and hybrid audiences.

Wade produces events for clients that reach people across the country. His latest live event streamed a hybrid business conference, showcasing virtual and in-person panelists, all with audience members watching in person and on the business’s website.

See the workflow diagram and the shot list Wade used for setup below.

We know a lot of BoxCast users produce and stream events just like this, and learning how a real-world videographer captures events and streams them online is invaluable for producers in the same boat. We sat down with Wade to talk about his production workflow, how he set up his gear, and how he pulled off an event with so many moving parts.

This hybrid event included viewers watching in person in the venue’s audience, along with people watching remotely online. The broadcast had five camera viewpoints. Wade cut back and forth between them throughout the event.

Who Is This Workflow For?

The workflow outlined in this post benefits anyone who has to broadcast an event taking place on a stage. Additionally, if you need to bring a virtual guest into an in-person or hybrid event, this setup shows you how to do that. This workflow is ideal for:

Give us a general overview of the event you were streaming.

I was hired to live stream a business conference in Canton, Ohio. They hosted the event at a church, which had a bigger event space in the back of the building. The space had seating for about 100, a stage, projector, and house audio.

The client had three presentations: one virtual over Zoom, one in person, and a panel at the end of the day moderated by the person on Zoom. I provided them with a two-camera setup, live video switching, PowerPoint integration, remote presenter support, graphics on the stream, and a live stream link for virtual viewers.

What kind of cameras did you live stream with?

For this event, I used a Sony PTZ camera and a Sony NX5R. The Sony PTZ is connected to an ATEM switcher via a 100-foot SDI cable, plus an additional 100-foot ethernet cable connected to the camera and the PTZ controller. You can use a PTZ camera without a dedicated controller, but then you’re stuck with a TV remote to control it. If you plan to have set movements and the camera’s always going to be in the same place, that might work.

For this conference, I needed a way to run the camera and follow someone onstage smoothly. Another reason I love using a PTZ camera is because I can set up to nine presets for the stage. I used seven for this event. One is a wide shot, two is on the podium, three is a shot of everyone at the table, and four through seven are all the people talking in the panel.

I was able to jump from one person to another for the panel with the click of a button. My Sony NX5R (although discontinued) is a workhorse. I highly recommend picking one of these up if you can get a used one for under $1,500. I used it for my static wide shot. I just set it in place and cut to it when people walked onstage. 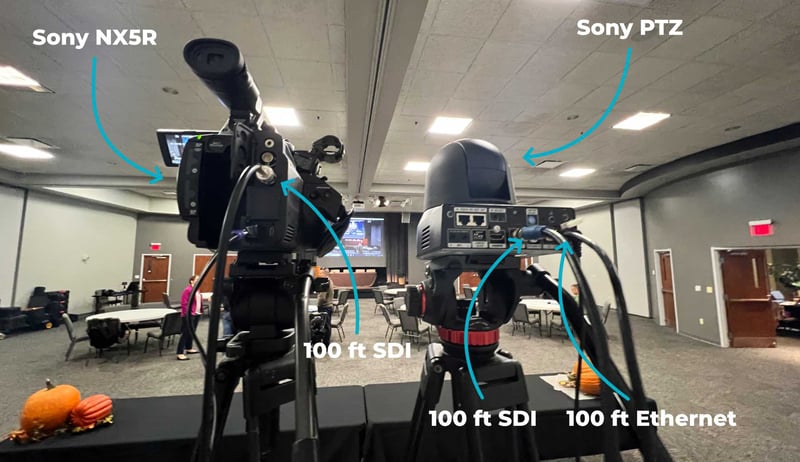 We know a video switcher is key in this kind of setup. Why do you like your ATEM Television Studio?

I use the ATEM Television Studio connected to a HyperDeck Mini for backup recording. I love this switcher because it has a mix of SDI and HDMI inputs and outputs. For this conference, I plugged into SDI 5 (Sony NX5R), SDI 6 (Sony PTZ), and SDI 7 (Laptop for Zoom and PowerPoint). Those were my three angles for the event. I had audio plugged in via XLR and used an aux send for the person on Zoom.

I generally like to switch right on the front of this unit. You can preview and just hit Cut — it’s great. This all outputs into the HyperDeck Mini, which records the program feed from the switcher. Then I output a feed via SDI to the BoxCaster Pro for streaming. This same SDI video carries audio for the stream as well.

How do you incorporate audio into the live stream?

This venue had a big AV rack at the back of the stage. There wasn’t really a dedicated output for me, but there was a ¼-inch output on the back of the mixer. I converted ¼ inch to XLR and ran that back to my mixer, which goes into the switcher. Audio-savvy people reading this are probably saying “No! What were you doing?!” — but it’s what I had to do to get the feed. There’s a little noise and it’s not perfect, but you can hear them clearly onstage.

Once plugged into the Zoom LiveTrak mixer, they went straight into the ATEM Switcher via XLR. Also, I was getting audio from camera seven, which allowed me to get whatever audio the computer was getting. This was for the person on Zoom and any videos on the PowerPoint. 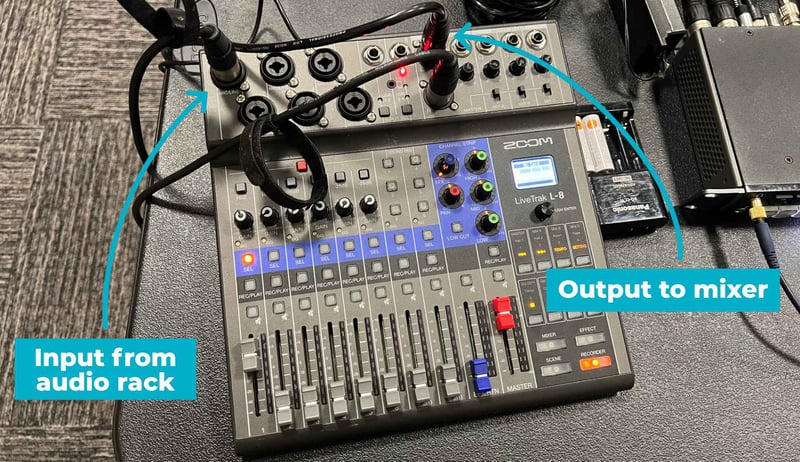 You mentioned there was a remote participant for the event. How did you Integrate them into the live stream?

This is going to be a long-winded answer, but here’s how I got them into the stream and PowerPoint.

Sometimes, I have to use my laptop for this part, but fortunately, this client had an extra one. I used a PC and its job was to run Zoom for our virtual participant and PowerPoint. 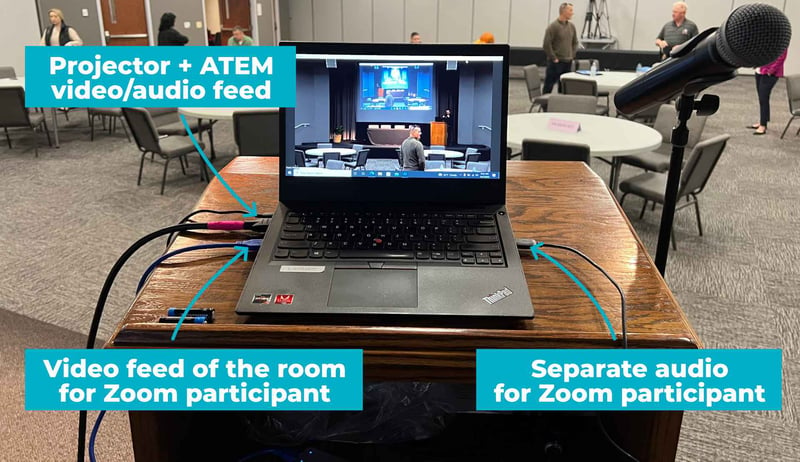 Getting the Computer Screen on the ATEM

Getting Audio from the Computer to Me

They had a headphone cable for audio, but I decided not to use that and sent audio over HDMI for the Zoom participant. This allowed me to separate the computer audio from the main mix and control it on my ATEM. If you want a Zoom speaker to feel like they’re in the room, you need to send them a clean audio feed of the people talking along with a camera feed so they can see the people onstage.

Getting Video + Audio to the Zoom Participant

For the video, I sent an aux feed out of my switcher to a Magewell capture card. An aux feed gave me the ability to send one camera instead of the whole program feed. The reason? If you switch to the Zoom feed for the live stream, the person on Zoom will see themselves, which could be confusing. So I went SDI to a Decimator, which converted it to HDMI and sent it to the Magewell. The Magewell converted the HDMI signal to USB for the computer to see. In Zoom, you can select the video as the Magewell.

As for audio, I sent a feed straight from my mixer via XLR to an XLR to USB converter and plugged that into the computer. You can't send everything over the capture card because the presenter will get their audio again, which creates that loop. You need to find a way to send them a separate feed that doesn't have them in it.

Lots of people would create a mix minus, but what I’ve found is if the venue takes audio over HDMI and it doesn't send over the original XLR feed, you get two separate audio feeds. The house mics come over XLR and the computer sends audio over HDMI. So as long as you send the computer the XLR feed, they just get the house mics and everyone can hear the person on Zoom because it takes the HDMI audio feed.

This Shure X2u XLR to USB converter is a lifesaver for being able to send a clean audio feed into a laptop for Zoom or a recording.

How do you add graphic overlays? Do you need any other gear for this?

With the ATEM switcher, you’re able to add graphics as long as you can hook up the ATEM software. You can also do this in the BoxCast Dashboard. Once you get a PNG image from a client, you can either use the Graphic Overlays feature from BoxCast or add it onto the ATEM.

For this business conference, I added it to the ATEM by adding to the media area, adjusting some Downstream Key settings, and whatever’s in media player 1. I clicked this little DSK 1 MIX on the front of the mixer and it popped right up.

Once you get this all hooked up, how do you live stream it?

The BoxCaster Pro makes this super easy. I just plug in an SDI feed for video and audio of the program feed from the recorder. I provide a channel link to the client and they send that to the viewers. Creating a channel and using the channel link is a failsafe. If you have to create a new broadcast for any reason, you can easily add it to the channel and viewers can hit refresh. If you give them a single broadcast link and the link stops, you’ll need to resend that to everyone — which could cause a lot of problems in the middle of an event.

For internet, this venue had Ethernet ports all over the place — but none were active. I’d usually just use my hotspot, but the venue actually had a strong Wi-Fi signal and connection. I tested it beforehand and it had a consistent 8 Mbps upload speed. When I did a test with my hotspot the day before, I had network issues that caused the stream to be blurry (known in the industry as packet loss) for the first 10 minutes, so I decided to test the Wi-Fi — and it was perfect. BoxCast always recommends using a hardline Ethernet connection when possible, but if you have time to test, Wi-Fi may also be a decent option. 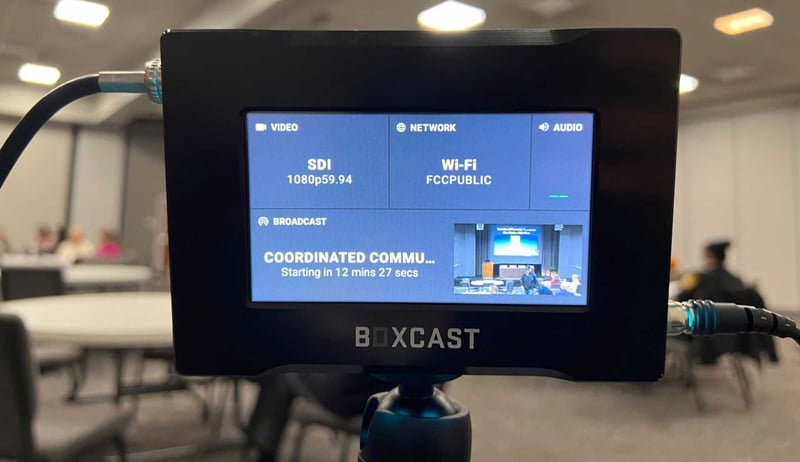 Do you have any final words or tips for our readers?

One thing you learn from doing these events is you aren’t just the videographer live streaming the event. You’re also the audio engineer, Zoom specialist, lighting expert, and go-to tech person in the room. Generally, if you want to keep your client, you need to help them with everything going on and not just hang behind the production table.

You wear many hats when you're producing live video, whether it's for a client or if you're in-house. Test internet and equipment as early as you can. Also, when event time comes, just breathe. You got this! 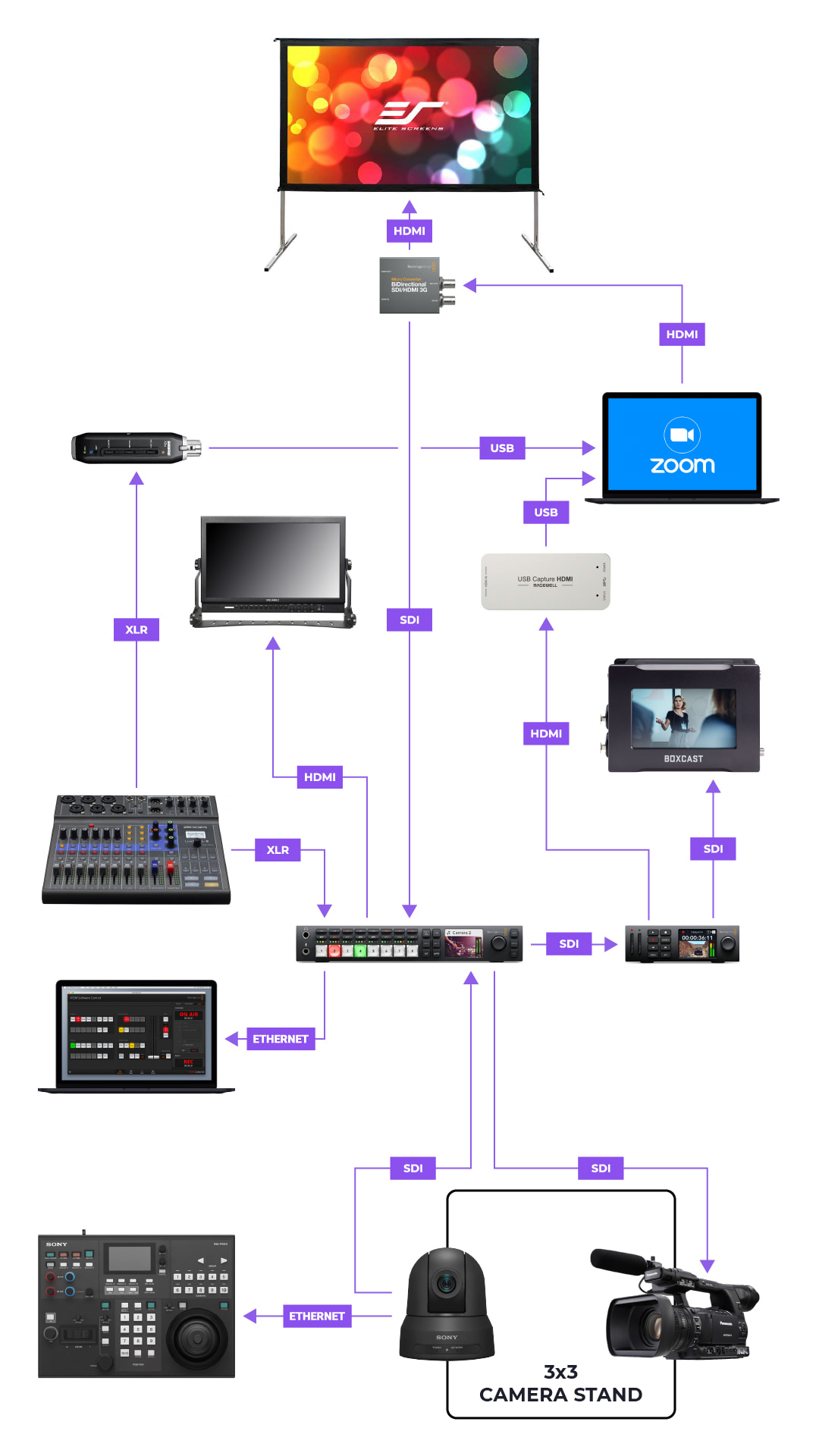 Broadcasters of all levels can benefit by hearing from video producers in the real world. If you’re new to live streaming — or just want to level up the quality and professionalism of your broadcasts — consider following our workflow guides. Each one is designed for every level of broadcasting — whether you’re a novice with a phone or an expert with a professional, multi-cam setup. Use these as templates for your own setup: