The video world is advancing quickly. It's tough for us all to keep pace with increasing standards and qualities.

Video resolution is only one aspect that affects the quality of a live stream. Alongside frame rate, it's the feature most top of mind in determining video quality.

If you're responsible for your organization's live streaming strategy and need to wrap your head around the advancement of video resolution, you're in the right spot.

Here are some quick FAQ's to get started:

What is video resolution? 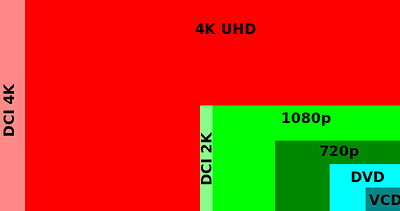 What do the numbers mean for video resolution?

What do the letters "i" and "p" mean for video resolution?

The letter "i" stands for 'interlaced' and "p" for 'progressive scan or non-interlaced.'

Interlacing is a shortcut that tricks your eyes into perceiving a full image in motion when, in reality, you are viewing every other line of that image. With interlaced video, your eyes fill in the gaps for you.

Interlacing video is a technique for doubling the perceived frame rate of a video display without consuming extra bandwidth.

What are the common types of video resolutions?

Though there are dozens of standards of video resolutions, we only come across a few of them regularly in the live streaming world. For the purpose of this post, we'll focus on 480, 720, 1080, and 4K.

Yes and no. There are a variety of factors that impact the quality of a video, including frame rate, compression processes, and dynamic range.

However, video resolution is all about the detail of the frames of the video. Resolution greatly influences the viewing experience, particularly when the video is played on large screens.

A 90 Second History of Video Resolution

Through most of the 20th Century, broadcasters transferred video via an analog signal (composite, component, VGA, etc). This process advanced over time. Still, US analog television dictated a 480i resolution.

The mid-1980s witnessed a breakthrough. Manufacturers developed digital video for commercial use, ushering in new opportunities.

In the 1990s, the FCC declared new standards for video resolution that included "high-definition" 1080- and 720-line video made possible by digital video. The digital era of television began at the end of the 1990s.

Related: HDMI and SDI are now two of the most common transports for HD and digital video feeds.

On top of bringing us higher resolution standards, the digital video revolution created the entire world of online video.  Platforms like YouTube, Hulu, Netflix, and Facebook Live have turned the  industry on its head in the past 15 years. Smart TVs allow us to watch all the content on our large-screen televisions. We can also open apps to launch live video on our laptops and phones.

If you want a more technical and detailed history of digital video, check out this infographic.

SD resolution is standard quality resolution. The resolution often refers to a pixel height of 480 in a single image. The frame is more detailed than that of a 360p, 240p, or 144p image , but less detailed than one that is 720p or 1080p.

As a broadcaster, you won't be sending video in anything less than 480, so that's our starting point. The lower levels exist for viewing video in poor network conditions.

480i video resolution (if you don't know what "i" stands for, refer to the intro section) was the common standard (at least in the US) for broadcast television in the late 20th century. It's also the standard for DVDs.

What does it mean to stream in standard-definition today?

If you look across the internet, you may come across various videos and streams limited to a standard-definition 480p format. Over the next few years, digital SD video with a max 480 resolution will become elusive across the internet.

Below you can see the decline in standard definition 480 streaming across BoxCast's customer base.

If you're streaming in standard-definition right now

HD video is now the standard. It's also affordable. The longer you wait, the more behind-the-times your organization will look.

720p is the bottom level of resolution considered "high-definition." To differentiate it from the other level of HD, 1080, it's sometimes called "HD ready" or "standard HD."

720p is one of the most common resolutions broadcast across the internet. If you're buying modern video equipment, you can expect 720p capabilities. At the time of this post, 720p is the maximum video resolution that can be pushed to Facebook Live. A number of major television broadcasters use this for their HD standard.

What about 720i? 720i never became an HD media standard due to lack of demand 🤷‍♂️ in the industry.

1080i and 1080p are also know as full HD. They are the higher quality standards of HD streaming.

1080i is the preferred HD format for most television broadcasters.

1080p, the progressive format of 1080, is used widely across internet content especially on platforms like YouTube and Netflix. There are some experimental use cases bringing 1080p to broadcast television as well.

Before you start to think that a 1080p stream is always better than in 720p stream, here's a quick reminder that other factors are still relevant.

When to stream in high-definition

If you're looking to stream at a high level, but 4K seems like overkill still for your organization, high definition 720p or 1080p is your sweet spot.

4K and the Future

The new kid on the block is 4K. Everyone in the world of video is now talking about it.

4K brings another fun wrinkle in terminology. Until this point, the numbers we've talked about refer to the pixel height of the image (1080p is commonly 1080 pixels tall and 1920 pixels wide).

However, to confuse us even more, the powers that be decided to switch to the pixel width for the label '4K.' So 4K is actually 2160p, if we're talking in the terms of the other video resolutions.

Furthermore, there are actually two different versions of 4K:

Confused about all of this? You find this quick video helpful:


4K is definitely the future. It's estimated that by 2024, 50% of US households will have 4K-capable televisions.¹ If you are looking to put out the highest quality of content over the next few years and are willing to make the investment for top production quality, your live streaming setup should be 4K-ready.

Technology will advance. You can search around and hear about 8K and 16K resolutions. For now, those technologies are too far out to warrant real consideration for streaming.

Knowing the basics is a great first step to deciding the right video resolution for your organization.

It’s also important to consider equipment, content, internet capabilities, streaming service features, and audience when deciding whether or not to provide higher-quality content for streaming.

What Does 4K Actually Mean?