What they Stream: Board of Commissioners Meetings

The Setup: 3 Remote Cameras into a Wirecast Switcher into the BoxCaster

We recently had the opportunity to speak with James Breedlove, the Audio-Video Coordinator for Rockdale County, Georgia about how Rockdale County uses BoxCast to stream their meetings.

Rockdale County, located on the east side of the Atlanta metro area, is the second smallest county in Georgia. Despite its size, the county’s location-- within short drive of downtown Atlanta, Hartsfield-Jackson airport, and the University of Georgia, has contributed to the fast-paced growth of its communities in recent years. The movie industry is particularly large in the area.

The administration began streaming to open up its meetings to the public who couldn't attend in person and to help the County staff remain productive and informed. According to Breedlove, “our Board of Commissioners meetings are usually Tuesday starting at 10 a.m. That’s not a very convenient time for most people. Most people are working. Most people are not able to come to the meetings.”

The County recognized the need to extend it's public meetings to constituents who were interested in what was going on, but needed access to the event in another way. According to Breedlove, “people love it and are able to get the information that they need.”

Additionally, the County uses streaming as a way to increase staff awareness and productivity. In the past, County staff members had to leave their desks and attend the Commissioner meetings in person. Now, unless the staff has an active role in the meeting, they can remain at their desks and working, but still tune in to know what's going on. “It was important for us to be able to have the employees listen to what’s going on in the County," says Breedlove. 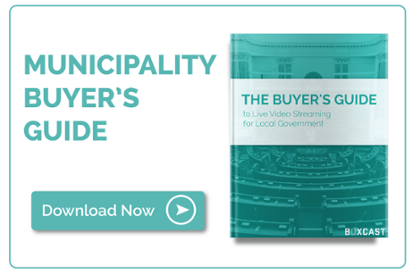 While the stream that Rockdale County produces may look like it comes from a production team, the reality is, they don't have many stafff members who work on it. In fact, says Breedlove, “Our department is pretty smal. It’s basically myself (working creating the broadcasts).”

The County has three remote cameras (Sony EVI-H100S) in their assembly hall. Those cameras feed into Wirecast video switcher software.  From there, Breedlove sends everything into the BoxCaster. Using the BoxCast Dashboard, Breedlove sends the stream out to an embedded video player on the home page of the County website as well as to Facebook Live.

Breedlove likes that the BoxCaster is small and portable. If there are events and meetings outside of the assembly hall, he can easily take it with him. According to Breedlove, “As long as I have an internet connection, I can take it wherever we go.“

Additionally, Breedlove appreciates the simplicity and ituitiveness of the BoxCast platform. “It’s not very hard to use. We love the interface as well,” he says.

Breedlove uses stream management and scheduling features to quickly schedule the next broadcast and the countdown timer to track the time remaining before the County goes on-air on their website.