Live Streaming Story: How to Share Events with Your Cross-Country Team [Venture for America]

Here's the story of how Venture for America, a national nonprofit based in New York City, made it's events accessible to it's team members across the country.

Growing pains are bound to surface for any business on the rise.

Though they can induce changes that catapult an organization onto its next phase of success, growth can also test its core spirit and even lead to its demise. If not managed properly, alignment, transparency, and identity are all at stake.

To successfully absorb these pains and use them to their advantage, companies must experiment with various solutions, hoping that the path they’ve chosen is the one that works best.

Venture for America, a nonprofit that recruits and trains top college graduates to help revitalize emerging cities through entrepreneurship, is one such company that found themselves at a turning point in their trajectory. Over the course of just 18 months, their team doubled in size, growing from 10 to 20 people.

Though this type of rapid growth can poke holes in any organization, its effects were amplified by the nature of Venture for America (VFA) in particular: at several points throughout the year, this small organization finds their team spread all over the country.

Keeping a Team Together

The biggest pull away from their New York headquarters happens every summer, when a large part of the team moves to Brown University in Providence, RI to run VFA's "Training Camp,” a five-week crash course that teaches the incoming class of Fellows the concepts necessary to be successful in their new roles at startups.

“We had a team that was distributed between Providence and
New York. Projects needed to be completed at HQ,
but team members wanted to stay plugged in...”

VFA Startup Partnerships Manager Jason Tarre notes that “When we grew large enough, our entire team could no longer be present at Training Camp. We had a team that was distributed between Providence and New York. Projects needed to be completed at HQ, but team members wanted to stay plugged in to all that was going on at Training Camp.”

The Providence-centered programming remained relevant to every member of the organization. With an ever-growing company and endless work that needed to be done, both in Providence and New York, VFA employees were being pulled in too many directions.

“BoxCast started as an experiment…”

That’s when VFA decided to turn to BoxCast, a Cleveland-based live video streaming company. First drawn to the easy setup and compact hardware, Tarre openly admits that “BoxCast started as an experiment to let team members who couldn’t be present in Providence stay connected to the rest of the team and learn from the valuable training sessions.” 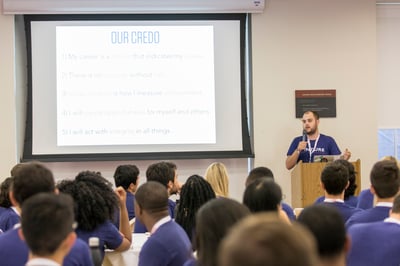 Even while sitting in a different part of the country, the Venture for America team could tune into the sessions hosted by companies like IDEO, McKinsey, and Flatiron School.

The response from the team? Tarre says “it was overwhelmingly positive.”

They especially appreciated the fact that BoxCast automatically archives every stream. If anyone was busy during the time of the training session, they could always access the archived version when it was more convenient for them.

With their experiment complete, Venture for America was ready to integrate the streaming platform into other parts of their business to see what it could do.

As a way to reinforce their commitment to city revitalization, Venture for America works with Fellows and local leaders to organize City as a Startup (CaaS), an annual conference in rotating cities that spurs conversations on the intersection of urban development and emerging technologies within that particular city.

These lessons are valuable for anyone who can hear them,
but as is often the case, people’s hectic and overcommitted
lives can prevent them from attending.

These lessons are valuable for anyone who can hear them, but as is often the case, people’s hectic and overcommitted lives can prevent them from attending. VFA offers to fly Fellows and highly-involved board members out to the host city, but many can’t escape their daily responsibilities.

To involve non-attendees in these conversations, VFA uses BoxCast to stream high-profile interviews and smaller panel discussions. Doing so shares the content with integral members of the organization who could not be there.

However, there is a secondary benefit to streaming these conferences: VFA leverages BoxCast technology to help with their fundraising efforts.

Donors want to know how their money is being spent and if the distribution channels align with what they care about. By streaming CaaS, VFA gives their donors direct access into these events, something that was impossible to do before using BoxCast.

“The opportunity to stream to the fellow community and very important donors is really powerful for the organization. There’s a lot of transparency there,” Tarre notes.

With a successful two years of live streaming under its belt, VFA happily reports that BoxCast’s streaming platform has become an inherent part of all VFA training, events, and even regular team meetings and check-ins. It’s the solution that has kept this organization aligned in everything that they do, allowing team members to tune into remote events and donors to validate that they’ve chosen the right organization to support.

Every member of Venture for America, from the staff to the Fellows to the donors, has bought whole-heartedly into the mission of the company. One day at a time, and one city at a time, the people involved in VFA are doing their part to improve the state of the country’s economy.

It’s a mission to be proud of. As far as streaming is involved, Tarre reflects that “BoxCast allows us to broadcast to our community what VFA is really about.”