Anyone who’s dipped their toes into the waters of live audio production knows that various little things have a huge impact on sound quality. For example, did you know that every cable you use in your production setup has the potential to add noise to your audio feed? It’s important to understand audio cables (and how they’re made) to properly assess which one is right for the job.

Having audio issues? You might want to check out How To Fix Audio Issues On Your Live Stream first.

In this post, we’ll discuss the types of signals different cables carry. As you’ll soon learn, they can either be balanced or unbalanced. Let's dive deeper into what balanced and unbalanced audio means.

An audio cable carrying an unbalanced signal uses two wires: a signal and a ground.

The signal wire, as the name suggests, carries the audio signal to where it needs to go. The ground wire acts as a reference point for the signal. However, the ground wire itself also acts like an antenna, picking up unwanted noise along the way. 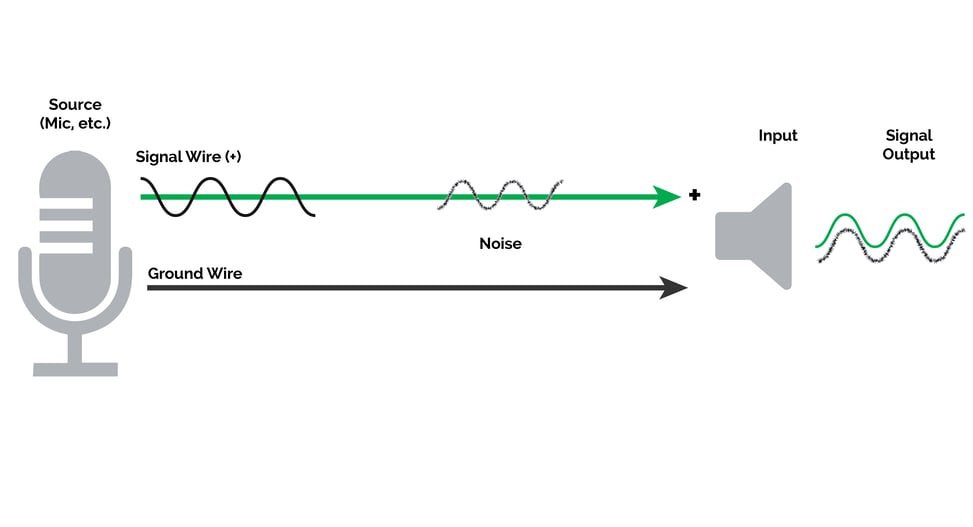 Because unbalanced cables can pick up noise as a signal is sent along the cable, they’re best used for short distances, like connecting a guitar to a nearby amp. This minimizes the risk of unwanted noise.

Where does the noise come from?

Noise can come from a variety of electrical and radio interferences, but it most commonly comes from power cables, which can create a humming sound if they're near cables carrying unbalanced audio. Older, non-LED stage lighting (such as spotlights or dimmers) can also add signal interference.

Note: The best technique for reducing noise when using unbalanced cables is to be careful with cable placement. A single perpendicular crossing of power and audio cables is much better than a parallel run. If parallel can't be avoided, leave as much space as possible between audio and power cables. 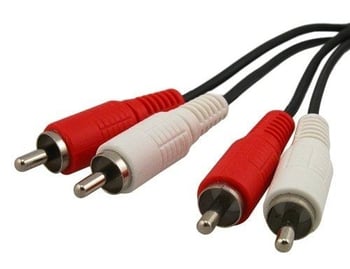 Quarter inch TS (tip, sleeve) cables are generally used for unbalanced signals. These are most commonly used with electric guitars, which often output to an amplifier. The diagram below shows how the cable works. 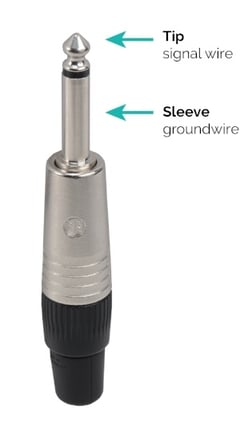 The structure of a balanced audio cable is similar to an unbalanced cable — with one addition. A balanced audio cable has a ground wire, but it also carries two copies of the same incoming audio signal, sometimes referred to as a hot (positive) and cold (negative) signal.

What’s the difference between the hot and cold signals?

The two signals are reversed in polarity, so as they travel down the cable, they cancel each other out. (Think of how adding positive and negative numbers of equal value amounts to zero.) 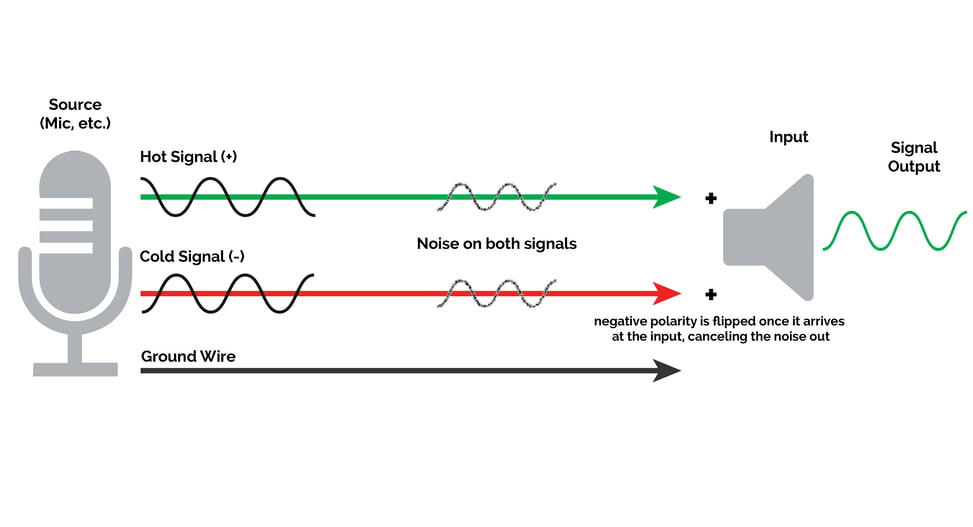 Once the hot and cold signal get to the other end of the cable, however, the polarity of the cold signal is flipped, so that both signals are in phase, and perfectly in sync.

Here’s the cool part: If the cable picks up noise along the way, the noise added to both of those cables is not reversed in polarity. So when the cold signal flips in polarity to match the polarity of the hot signal, the noise carried along the cold signal cancels out with noise in the hot signal. This canceling out process is called common-mode rejection, with the noise being the common signal between the two.

XLR cables can send balanced audio signals up to 200 feet. As you see in the diagram below, there are three male pins inside the connector: the groundwire, the hot signal, and the cold signal.

A quarter-inch TRS cable is another balanced professional audio cable. TRS stands for tip, ring, sleeve, and can be used to send either mono (balanced) or stereo (unbalanced) signals. You can see in the diagram below how each one plays a role in the structure of a balanced signal. 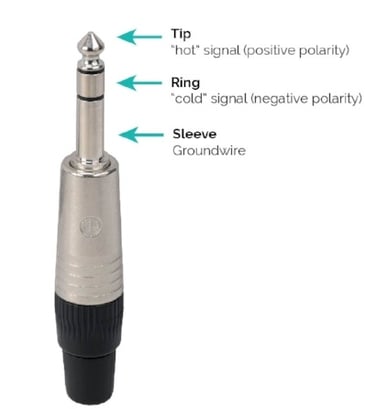 Sometimes people confuse balanced audio signals with left/right right stereo balance, which is when audio is split into a left channel and right channel. This can be confusing because the connectors shown above can carry either balanced signals or unbalanced stereo signals (left and right channels).

Note: While it's less common, XLR and TRS cables are also capable of carrying unbalanced, stereo audio (both left and right channels on one cable) to a destination. They are, however, still susceptible to the noise that unbalanced signals are prone to in these scenarios.

We’re strong advocates of balanced audio cables. They’re less susceptible to noise and provide a more reliable signal, which is stronger over long distances. If you find yourself in a situation that requires unbalanced audio cabling, make sure to cross them perpendicularly to any power cable they may encounter.

Here are some more resources we think you might find helpful:

How To Fix Audio Issues On Your Live Stream

How To Fix the Buzzing Noise on Your Live Stream

Two Simple Ways to Include Audio on Your Streams