Why We Love Blockbuster Premieres and Live Video

I love watching movie trailers. I especially love this time of year because production studios are pushing their big-budget winter blockbusters.

According to vocabulary.com, a blockbuster is a Hollywood movie that's made with a large budget and big stars. A true blockbuster is extremely popular and brings in a lot of money. It’s not unusual for audiences to show up in droves and line up to see a blockbuster the first weekend it's released.

You know the drill, right? We wait in line forever, pay $20 a ticket, buy a bag of buttery popcorn that is the size of an infant, and cram ourselves in front of a screen with hundreds of other people that we don’t know. Why? We do this so that we can be part of the thousands of people who see the blockbuster movie first.

At this current point in time, the highest grossing revenue film that has ever made on an opening weekend was The Fate of the Furious, which made $541,937,239. The next week, the numbers plummeted and the amount of revenue it brought to the box office was 60% less than the weekend prior. Why is that?

It’s remarkable what a person will do to be the first one to see or know something. We want to be relevant and informed. This same principle plays true when it comes to the news stations racing to be the first ones with the story. We are all racing to get urgent information as it's released, or while it's happening. This same philosophy applies to live video streaming. We’d like to be the first to see something rather than waiting a month or week or even a day to see it.

Live video is also far more engaging than recorded video, as the urgency of the content makes the viewer pay greater attention. I would even argue that some content is only good live, as your viewers may simply lose interest once they know the event has already occurred. Think of how likely you are to watch a broadcast, whether it be sports, seminars, presentation, or news, once you know the content is dated.

With these types of events, it's arguably better to live stream the content than to leave it up to the viewers to watch it later. The beauty of using services like BoxCast is that it’s just as easy to stream that content live, as it is to record it locally and upload it later.

The next time you host and/or record an event, consider whether your viewers will find it more relevant while its live, or after its over.

Extra Reading: If you're curious about live streaming for your organization and are looking for more information that will help you evaluate which streaming provider will best suit your needs, download The Buyer's Guide to Live Video Streaming. 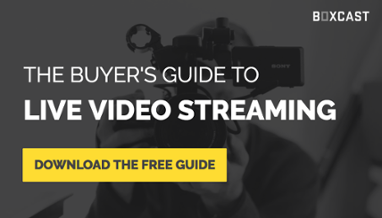