What Should You Know About Live Video in 2017?

There's no doubt about it: live video streaming has taken off.

As streaming inevitably becomes even more popular, video equipment will become increasingly accessible and affordable. Below are other video trends you can expect in 2017.

This list was first published in The Best Live Video Streaming Equipment: Spring 2017. For a full look at the current state of live video, in addition to a comprehensive list of the best streaming equipment, download the free guide. 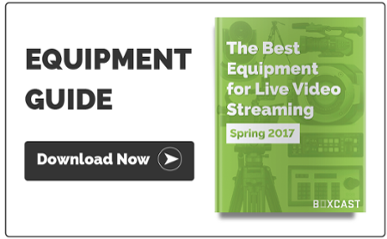 This means that you can expect new live content creators to emerge in 2017 and have their content fill your feeds. Recognizing this growth, many streaming providers, including BoxCast, are beginning to offer direct integrations with Facebook Live.

The use of various camera angles in a single stream allows organizations to tell a more complete story. Video producers have recognized this and are seeking affordable options to allow them to do just that.

The market is meeting this increasing demand, offering switchers and other multi-cam video equipment for a fraction of what it used to cost. Some streaming providers are now even offering solutions that don’t require a camera, including BoxCast Switcher, an app that lets you mix content from various iOS devices.

Video producers will continue to experiment with both virtual reality and 360 video for live events. As VR and 360 cameras become more affordable and less complex, this popularity will surge. However, there will undoubtedly be a learning period in which content creators determine the best ways to incorporate this new tech into their streams.

HEVC (High Efficiency Video Coding) is a new form of video encoding that allows you to stream live content at a far more efficient rate than what is currently possible. Choose whether you’d like to cut your bandwidth in half for a HD stream or stream at an even higher quality without using up all of your upload bandwidth.

4K refers to a video resolution that contains four times the detail of modern HD televisions. Though it’s still in its experimental state, we’re confident that 4K live streaming is about to take off. Expect to see streaming providers adopt HEVC encoding and roll out new products that will allow broadcasters to create 4K content for the web.

The world of streaming tech is moving fast, and it's not always easy to keep up. That's exactly why we created The Best Equipment for Live Video Streaming: Spring 2017 Edition. Whether you're just starting to stream your events or want to update what you already have, this guide is for you.